Sometimes finding the correct version of Python used in a virtual environment can be a problem. This blog post provides some good tips on how to fix the problem. http://takluyver.github.io/posts/i-cant-import-it.html

It often seems like technology company deals are so ugly that only the bankers could love them. That is why it was refreshing to see a deal that makes sense on a lot of levels. Reading a lot of the news reports I feel that there is a deeper narrative at play that has largely been glossed over. So here is a quick summary of the great options that this deal provides Amazon.

In the short-term this deal gives Amazon a power position over their competitors in food delivery. Instacart for example uses Whole Foods stores to get groceries and deliver them to customers. Assuming this deal continues, Amazon will benefit by getting a cut of the Instacart transactions. You can think of this as the Amazon tax. If Instacart starts making more money, Amazon can just raise prices via Whole Foods to get a larger cut of Instacart’s business. Instacart could also decide to move on to another grocer but Whole Foods has unique food selection. Plus, Amazon has a history of letting others user their infrastructure (e.g. AWS, fulfillment centers) and might prefer continually getting money from Instacart transactions rather than kicking them out. This deal also has short-term implications for Amazon’s current partnerships. Here in the greater Seattle area Amazon works with PCC which is another grocery store. Amazon can continue to work with PCC and use their ownership of Whole Foods as leverage in future negotiations. However, PCC will most likely be relegated to support burstable demand when the Whole Foods stores don’t have enough supply or are too busy. From a retail perspective, I wonder if Prime will enable Whole Foods to lose their “Whole Paycheck” reputation by using Prime as a driver of revenue in physical retail while lowering prices in the actual store. This is similar to Costco’s model.

Another interesting option is the stores being the fulfillment centers for groceries and perishable goods. Amazon has 99.4 million square feet of fulfillment centers (this also includes data centers which Amazon bundles in this number) in North America (source) and with Whole Foods they will now have an additional 17.8 million square feet spread across 456 stores in the USA, Canada and Europe (source). Whole Foods stores are known for being in prime locations in urban areas providing ideal locations for Amazon to reach customers in densely populated areas. These areas have higher costs and are not the type of places where a frugal retailer would open a fulfillment center. Closer locations to densely populated areas give Amazon the opportunity to provide other goods more easily to customers in 2 hours or less. Proximity is critical and the grocery store makes having a mini urban fulfillment center a profitable endeavor and not just a cost center. The more stuff you can get in this timeframe, the less likely you will be to go to the store, which leads to buying more stuff from Amazon and the flywheel will pick up speed. Amazon arrives at my door so often now I am starting recognize some of the drivers.

In the long run this is where we can see some of the more futuristic scenarios like Amazon Go. Amazon Go uses artificial intelligence so customers can grab what they need and go. As sexy as these scenarios are unless the technology is ready for prime time it is unlikely this was a strong driver for the deal. According to Amazon’s 8-K, they will be paying $13.7 billion which will be paid for in debt so any efficiency from AI won’t make this deal payoff right away.

Speaking of money, when you look at Amazon’s financials it makes sense that they would borrow the money. With $15.4 billion in cash at the end of the last quarter it highlights that Amazon is a technology company that has the financials of a retailer. Whole Foods free cash flow of $400 million last year is also not a spigot of cash that will make this deal a quick payoff either. Some argue that Amazon got Whole Foods for free because Amazon’s market capitalization increased by $11.2 billion today. This is a cash deal so the currency comparison in this case is apple and oranges unless they are going to have some secondary offerings. More importantly, Amazon has never been overly concerned about profits and this time should not be any different.

The reason why this deal makes sense in my opinion is really about the short, medium and long term optionality that sets them up for success regardless of how the food delivery industry turns out. It is for those reasons that I feel that Amazon truly made a strategic purchase in acquiring Whole Foods (pending regulatory approval of course).

While installing TensorFlow on a Mac running El Capitan I kept getting one of those crazy Python errors that are impossible to decipher. Thanks to Stackoverflow which always saves me while coding I found out the problem. It is apparently “due to the System Integrity Protection introduced in OS X El Capitan.” The fix is copied below for the next time I run into this error. Thank you for the tip Kof.

I am traveling home form Orlando where I presented at Microsoft’s Worldwide Partner Conference. It was great fun and I learned a lot from our partners. Since over 4,000 people from the Seattle area are here I had to change my travel routine. In this case that means traveling on American Airlines to get home.

American Airlines has an interesting checked baggage pricing structure that I listed below:

Orlando is the home of Disney World so there are a lot of families meaning lots of bags. So of course a lot of people try to put huge bags in the overhead bin. This causes so many delays and frustration for the people waiting.

Hopefully American Airlines could adopt more reasonable price discrimination so they discourage a lot bags without creating problems for the travelers.

Once someone starts working it is hard to find the time to go back to school.  As someone who recently finished a part-time MBA program I can vouch for the time juggling required to do it successfully.  Yet I always find some time to tinker which is great but there are benefits to having some structure to guide the learning.  So when I learned about an online search engine development class early this year from a startup called Udacity I figured I would see what online courses are about.  At the time I was doubtful I was going to do more than half of a session.  What a surprise it turned out to be.

If you have never heard of Udacity, it is a company that uses the internet to make computer science classes accessible to a broader range of students.  My class was taught by Sebastian Thrun and David Evans who are professors at Stanford and University of Virginia respectively.

After trying out a class session I left it alone and was going to forget about it.  Then I received a reminder email from Udacity and the next session sounded interesting so I decided to check it out.  With the light reminder emails, quizzes, and homework assignments I slowly got more engaged and invested time in the class. Before I even realized it I was going through the sessions (and sometimes the homework) each week.  This class format worked for me for a few reasons.

Discussions around online learning have been primarily focused on accessibility for people who are far away from a university or cannot afford how much it costs nowadays.  I would also add that it is great for people who cannot afford the time that it takes to go back to school.

I even got a certificate for my time. 🙂 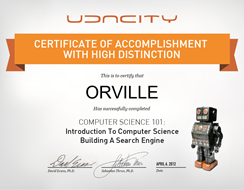 It is common to write a “Hello World” application when starting on a new platform. This is my first MSDN blog post so I would like to start by saying “Hello MSDN” and to thank you for taking the time to read my post. I hope you will find my posts useful and feel free to send me comments.

So here are a few things about me to start the conversation:

1. Spent most of my career as a program manager working on web services, most recently Windows Live ID. It was amazing to work on web services that impact people all over the world.

2. In delivering web services to the world I still had a yearning for driving businesses forward. So I decided to pursue a career change and go into product management.

3. I’m a technical product manager in Visual Studio focused on both Windows Phone 7 and Web development.

4. Outside of work I am a MBA student at the University of Washington focused on marketing and finance.

Over the past few months that I have been here I’ve been playing with the phone tools and I can’t wait for Mix so everyone else can see them. My blog posts will focus on technology, business, product management and other random musings as they arise. J There will be lots of fun tidbits about announcements, technology, etc.